A Journey Through the Basque Country 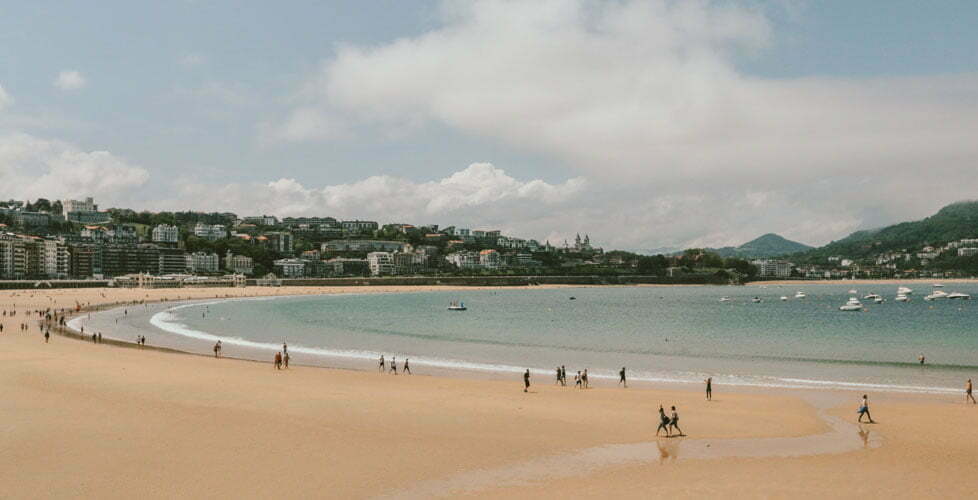 With a warm, but notoriously wet, climate and a land punctuated with sparkling rivers, powerful seas, humid forests, lush valleys, wild mountains and expansive plains, France’s Basque country is a vigorously productive environment. Small wonder then that it has produced a people that are rightly obsessed with food, and the rest of the world is beginning to see things from their point of view too.

The French Basque Country (Pays Basque) is flanked on its southern side by the Pyrenees and by the Atlantic to the west. These two powerful elements have played a fundamental role in the development of the Basque character, and of its cuisine. The Basques are renowned for their independent, adventurous spirit which in the 16th century led their fisherman to travel huge distances (off modern-day Canada and the USA) where they discovered wildly abundant cod stocks. This spirit and their seamanship which also saw that Basques invariably played a role in any major exploration expeditions, including that led by Columbus, whose boat was probably built by Basques.

That spirit has also played a role in the renown that Basque cuisine enjoys today. As the Basques went out into the world hundreds of years ago, they began the process of a conversation with everyone they encountered and which is now in full flow.

Fish has always played an important role in Basque cuisine. Whether it is from the days when they dominated the whaling industry in Europe, or today when no market restaurant worth its salt doesn’t offer a version of squid (chipirons) or salt cod (morue) — a process the Basques perfected and which brought about their dominance of the seas for so long.

But inland fish play a role too, especially the trout from the inland province of Navarre, a place where wide, green plains meet folding mountains and gushing rivers marked by “steep bluffs, dark with trees and jutting with grey stone”*. This river fish is delicate enough to be eaten raw, but is also much enjoyed with another speciality of the region, Bayonne Ham.

Bayonne is an old town with a modern energy where cobbled streets flanked by tall, colourfully painted buildings will inexorably take you on a meandering tour of local delicacies, especially of ham and chocolate.

Born of a thousand-year-old tradition, Bayonne Ham (available at Khéma) is France’s most famous cured ham. The curing process takes almost a year in which the hams are salted for two months and then dried for at least seven. The result is a tender, buttery smooth and slightly salty ham that is frequently compared to prosciutto.

For something a little bit sweeter, then there is the Gateau Basque, a sort of mix of a pie and a cake, with a cherry jam or crème patisserie filling. The best version can be found in the small (almost one-street) town of St. Pée-sur-Nivelle at a patisserie called Maison Pereuil, where the cake/pie has been made according to a secret recipe by the same family for five generations.

The cherries that provide a sweet/sharp tang to each bite are usually regionally unique xapata cherries from the village of Itxassou. The cherries here come in huge abundance, and are also used to sweeten up things when eating locally produced cheese, especially Ossau-Iraty, a smooth-but-with-bite sheep’s milk cheese, the region’s most famous, which is produced according to traditions that go back as much as 3,000 years according to some.

Great flocks of dairy sheep are scattered all across this region, resulting a divine amount of cheeses to choose from, including sheep’s, goats, cows and mixed sheep and cow’s milk cheese that the locals are crazy for.

St. Pée is also famous for its peppers, though not nearly as much as, the village of Espelette, the spice’s natural home in France and the spiciest pepper grown commercially there. The Basques were the only group of people to take full advantage of the bounty brought back by South America’s early colonisers’ and took the spice peppers to heart. The pepper is named after the village which is responsible for cultivating a home amount of these peppers each year.

The peppers play a vital role in Basque cooking, which is known for taking simple ingredients and cooking them simply, without much in the way of elaboration. When you have such delicious ingredients on your doorstep, the best thing you can do with them is keep things simple. With its white houses with shutters the colour of bulls’ blood, Espelette is a picture postcard village and one that tourists invariably make a beeline for.

The Basque Country is a traveller’s and gourmand’s dream in one, contained hit. There is something to be found for everyone.