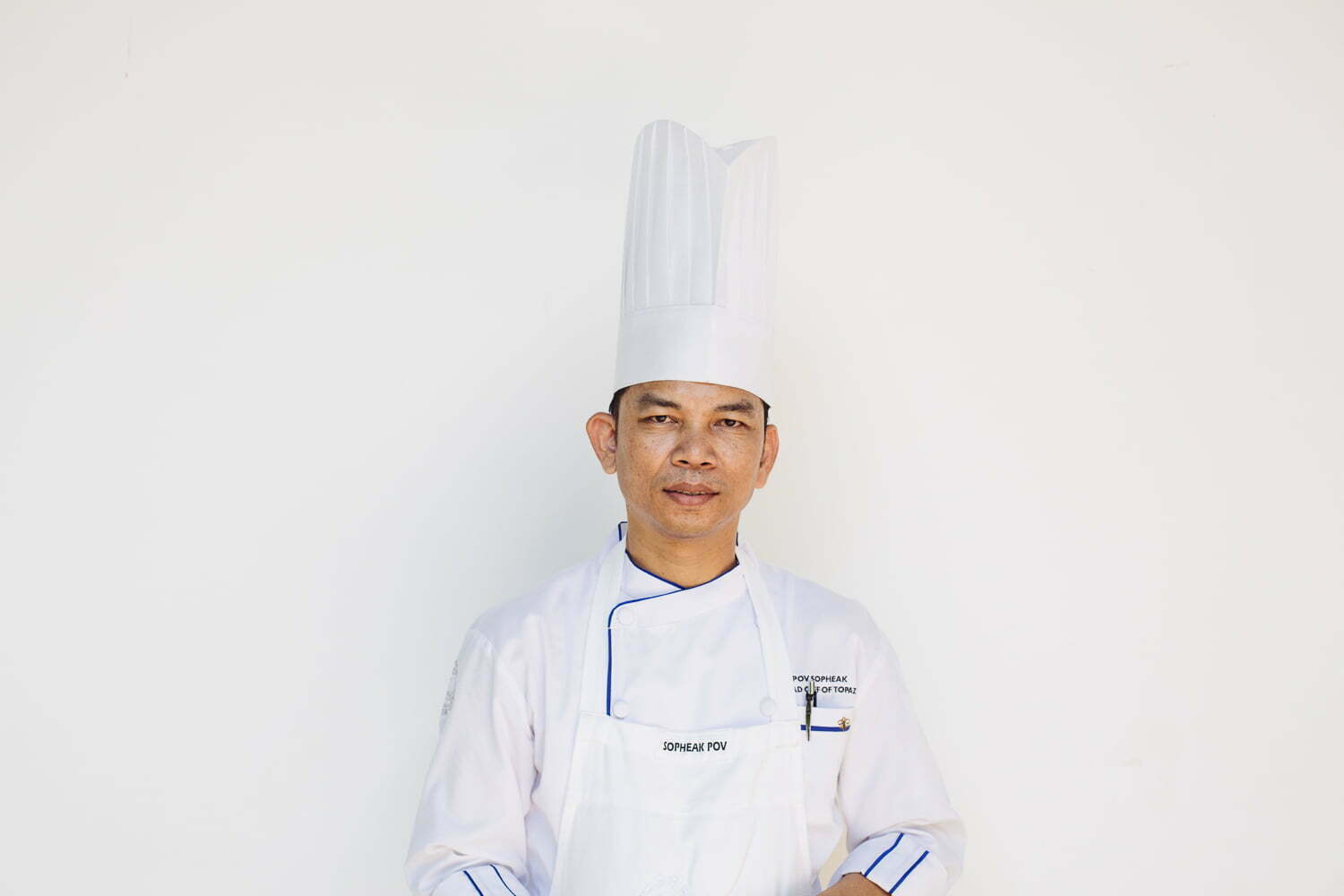 Getting an appointment with the chef who presides over the kitchens of the Topaz restaurant is no easy task. Chef Sopheak is a man with a busy schedule! It should be known that in addition to managing a brigade of more than thirty people in the Topaz kitchens, he is also in charge of all the preparation work for two other restaurants of the Thalias group in Phnom Penh: Khéma Pasteur and Khéma La Poste.

Sopheak is, like Madame Chocolat, one of the brilliant successes of these charitable associations that, having understood that vocational training in Cambodia was bitterly lacking in means, work tirelessly to teach a trade to the Kingdom’s young people.

Now forty-three years old, this Svay Rieng native studied cooking with the NGO Friends International, known in particular for its restaurants, Friends and Romdeng in Phnom Penh, and Marum in Siem Reap. During this year, back in 1996, Sopheak acquired the basics of western cuisine. A year later, he was recruited as a trainee in an establishment well known to lovers of French cuisine, Comme à la Maison. In 2001, he went to work at the River House on Sosiwath Quay.

Sopheak remembers precisely that it was on October 2, 2002 that he made his debut at Topaz as a simple kitchen boy. But he applied himself and gradually climbed the ladder in the restaurant’s kitchen, until he was finally offered the position of chef de cuisine in 2010. It has not always been an easy path, because “Papa” (Alain Darc), himself an experienced chef, is a cook whose demands for quality are uncompromising.

Before taking over management of the ovens, Sopheak had the opportunity to hone his culinary skills in France, where, during a six-month stay, he worked in two renowned establishments: Le Carré des Feuillants (two Michelin stars), in Paris, and Le Relais de la Poste, a gastronomic restaurant located in Magescq, near Dax. Sopheak’s main difficulty during this time lay in communicating with his chefs and colleagues, because although he speaks English fairly well, his knowledge of the French language is more limited. But despite the language barrier, Sopheak says he learned a lot during his stay in France. It was after returning from this intensive semester that he was officially put in charge of the kitchen.

The executive chef at Topaz is a passionate man. He masters his ingredients and techniques perfectly and constantly tries to innovate. He also understands the tastes of his customers, not all of whom are familiar with French cuisine. The majority are Khmer (French and other foreigners represent less than 40% of the clientele, while the Chinese clientele is constantly increasing), so the menu must be adapted. While Topaz’s cuisine is resolutely French, it uses ingredients less appreciated by the Khmers, such as fresh cream and those with overpowering aromas, more sparingly. Moreover, the menu is much more eclectic than is usually the case in a typically French establishment. Sopheak explains that he would find it difficult to satisfy his guests if his menu was smaller.

The master-tailor continues to learn through travelling. He has thus had the opportunity to visit some of the establishments that have recently been honoured by the Michelin guide in Thailand, as well as Joël Robuchon’s L’Atelier and, above all, Normandy, which he talks about with enthusiasm.

Sopheak also takes full advantage of the visting Michelin-starred chefs (already nine to date) who have all helped him to perfect his knowledge and techniques.The chef’s greatest hope now is that gastronomic dining in Cambodia will continue to develop, and that he will finally have the opportunity to exercise his talents in a starred establishment without having to leave his native country.