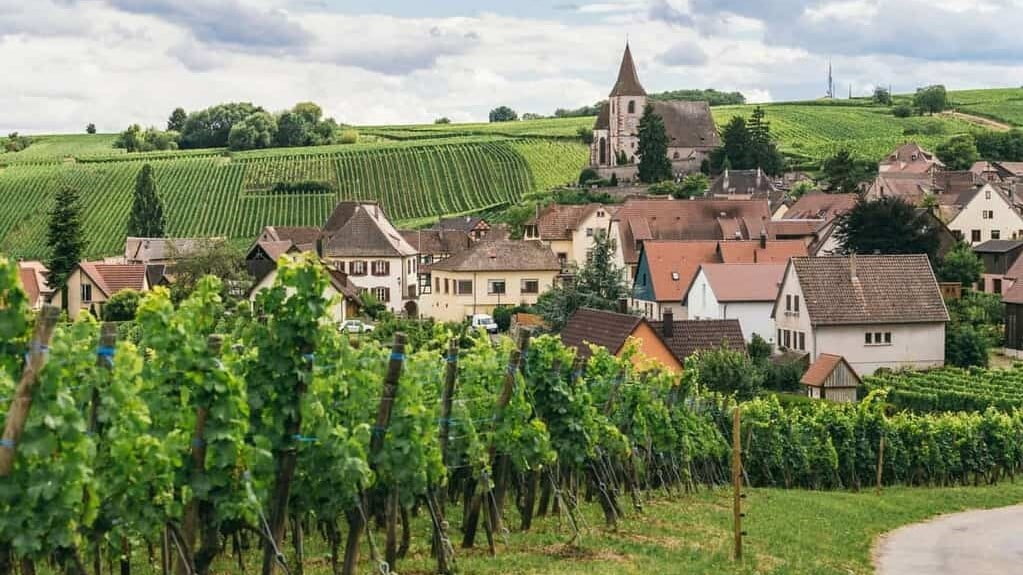 By all accounts, Joseph Drouhin was an enterprising young man. He came from the Chablis region in the far north of Burgundy and -at just 22 years of age- he moved to Beaune and set up his own wine company. Over 140 years later, that wine business is still in family hands and regarded as one of the world’s great domaines and negociants.
In the words of the venerable British wine merchant Justerini and Brooks -who themselves have been in business since 1749 and received ‘royal warrants’ from every ruling British monarch since King George III, (rule 1760-1801).
“Joseph Drouhin are a family-owned Domaines and Negociant who command the greatest respect of all the big Burgundy houses… The crown jewels in the Drouhin portfolio are without doubt the Domaine Marquis de Laguiche, which has the largest percentage of land in Le Montrachet (30%) of all the owners, and the Domaine Drouhin-owned Clos des Mouches. Drouhin have had exclusive control over the former estate, from cultivation to distribution, since 1947, while Clos des Mouches is one of those rare breeds in Burgundy, a monopole. Originally planted with Pinot Noir, almost half the vineyard was replanted with Chardonnay in 1921 by Maurice Drouhin, (Joseph’s son).”
Joseph Drouhin’s cellars have spread from the historical cellars of the Dukes of Burgundy and the Kings of France, in Beaune (12th-18th centuries) to the Moulin de Vaudon, an 18th Century watermill in Chablis. The Domaine was assembled parcel by parcel over the years and comprises today 80 hectares (197.5 acres) of vineyards in Côte de Nuits, Côte de Beaune, Côte Chalonnaise and Chablis. It is one of the most important domains in Burgundy, with more than two-thirds of the vineyards classified as Premier and Grand Crus.
With close to 90 different appellations, Joseph Drouhin offers a fascinating array of Burgundy terroirs in all their authenticity and subtle variations.

Chablis Then
Chablis, which sits at the far north end of Burgundy, is one of the world’s greatest wine regions, renowned for producing unique white wines from the Chardonnay grape, wines that are like no other. They are the epitome of the expression ‘terroir’, unique to their place and a true expression of where they come from, their soils, climate, variety and people.

Having seen cultivated vines in the area since the time of the Gauls, the region was expanded by the Romans, then vines were pulled up under the Emperor Domitian (81-96), and replanted under Emperor Probus (276-282); this was 18 centuries ago.
From the 9th century, the vines were in the care of Benedictine Monks and beginning to earn a reputation for their quality and style. Eventually, wines were being transported up the Yonne River to the capital and spreading out over the country, the earliest record of a wine transaction in the region was the sale of some Chablis to a merchant from the north of France in 1455. Chablis made a name for itself in Paris and soon found its way to the King’s table. By the latter 1400’s Chablis had a population of over 4,000 people, (compared to 2,500 today) and its wines were being celebrated all over the nation.
In 1568, Chablis was attacked by the Huguenots, so devastating was the defeat that prosperity did not return to the region for two centuries but by the 1700s Chablis was finding its way to England in large quantities.
At the end of the 19th century, the dreaded vine disease Phylloxera and Mildew devastated the vineyards of Chablis, manpower was also decimated by the loss of so many young men’s lives during ww1, at the beginning of the new century.
By the end of the Second World War in 1955, Chablis was all but abandoned, only 550ha of land under vine remained. In 1957, the entire vintage was lost to extreme frost, and as hard as it is to believe today, Chablis was on its knees. Enter one Robert Drouhin.
Robert Drouhin was set to study enology and viticulture at the university in Dijon in order to prepare him for the day he would take over the family business, Joseph Drouhin but he would never make it to school. 1957 was a terrible year in Burgundy, not only for the frosts in Chablis and the, lean acidic wines produced throughout the rest of the region, it was the year Maurice Drouhin, son of Joseph and manager of the family business, adoptive father of Robert, suffered a severe stroke.

Maurice Drouhin
Maurice Drouhin was already a Burgundian legend even in his own lifetime, having taken over the family business in 1918 he set about a fine estate for the family business and specializing in Burgundy, acquiring the prestigious property in Beaune of Clos des Mouches and another vineyard in Clos de Vougeot and continued to expand the company after the Second World War.
During the war, Maurice served as an integral member of the resistance and was said to have been the liaison officer for General Douglas McArthur. On the 7th of June 1944, the Gestapo came for him. As Jacquie Morrison manager of l’Oenothèque Joseph Drouhin told Decanter Magazine; ‘When the Gestapo had enough evidence that Maurice had been passing on information to the ‘“enemy”, they sent an execution squad to kill him,’
A tip-off allowed for his escape to the family’s vaulted cellars, a 13th-century labyrinth of passages and tunnels under the Duke of Burgundy’s Parliament building, that sprawl out for almost a hectare. Knowing these vaults so well allowed Maurice to eventually find his way to the now-famous ‘Door of Freedom’ which leads to the Hospices de Beaune. During the was the Hospice or, Hôtel-Dieu as it was also known, was still being run as a charity hospital by Catholic nuns, as it had been since 1443.
The Drouhin family had always been close supporters of the organization and Maurice himself had been the vice-president of the Hospices. The mother superior, at great risk, took Maurice in and hid him there for four months, when Beaune was finally liberated by the allied forces on September 8th 1944.
It is part of family lore that whilst Maurice was in hiding the mother superior would meet his wife Pauline at church and pass in instruction on how to manage the wines and manage the business in his absence.
At the conclusion of the war, Maurice donated two hectares of his finest Beaune 1er cru vineyards to the Hospices, his way of thanking them for saving his life, after that, he was for many years an Administrator of the Hospices de Beaune, and was then Vice-President of its administrative Commission from 1941 to 1955. All at the same time as running the family business in Beaune, négociant-éleveur Joseph Drouhin.
His generous donation of top vineyards constitutes one of the largest Cuvées of Beaune 1er Cru in the Domaine des Hospices (covering 2.69 ha.). 40% of the land lies in Les Avaux, 25% each being Champs Pimonts and Boucherottes, the balance Les Grèves.

Robert Drouhin
At seven years of age the young Robert Drouhin had already lost both his parents, he and his sister were then moved from Paris to Beaune to live with their Aunt and Uncle, who adopted them. When the Germans invaded Robert could recall helping his Uncle hide precious wines in the vast maze cellars they owned.
At just 24 years of age, Robert Drouhin took over the family business and the care of his uncle, he would run the company with great success for the next 47 years; building it into one of Burgundy’s most successful companies and helping solidify the international standing of one of the world’s most important wine regions.
After phylloxera, war, depression and crop loss Chablis needed a hero, Robert Drouhin did not see the devastation, he saw instead an opportunity. The Kimmeridgian limestone in Chablis contains millions of tiny marine fossils embedded in a kind of whitish marl, this was once an ancient seabed and forms part of the ‘Paris Basin’ which stretches from here all the way to the White Cliffs of Dover in England. This marine origin material gives the wines of Chablis their unique flavour and Robert began buying up choice vineyard sites in the region.
Robert also began to take the business towards environmental sustainability and by 1988 they were completely organic, since 1997 the business has been 100% biodynamic. In 1987, Robert purchased 100 acres in the Willamette Valley and asked his daughter, Véronique, a trained enologist, if she would oversee the project, and Domaine Drouhin Oregon was born. The project took time but eventually met with great success, to such an extent that Burgundian colleague Louis Jadot would also invest in the region.
Chablis Now
Slowly solutions to the problems that besieged regions like Chablis were met with solutions, grafting would all but eradicate phylloxera, and innovation and technology would help manage other issues, heating in the vines reduces crop loss from frosts. The magnificent 1970 vintage marked the return of wealth to Chablis and glory to the Drouhin venture into the region.
Today, the Chablis wine region comprises around 5,800ha under vine. A new generation of viticulturists and oenologists have taken up the challenges in the vineyards and wineries. Better trained than their forebears, many of them have made wine overseas and know how to blend age-old tradition and modernity. Joseph Drouhin releases two Chablis, 3 grand cru, and four premier cru wines from the region.

Joseph Drouhin owns around 6 hectares of vines (15 acres) in the Valley of Vauvillien, nestled between the Mont de Milieu and Montée de Tonnerre Premier Cru vineyards. The name “Moulin de Vaudon” comes from the watermill nearby, owned by the Drouhin family and straddling the Serein River.

Domaine de Vaudon, Chablis, 2018
Made from 100% Chardonnay, 100% Biodynamic
The yields from this vineyard are kept deliberately low to preserve quality and concentration of flavour, average crop size is around 20% lower than the current appellation laws permit. The grapes were harvested by hand and given a slow, gentle press. 12 months’ maturation takes place in older barrels, (100% French) to allow for a full expression of fruit’s aromas and flavours. It is worth noting that Joseph Drouhin insists on total control of the weathering of its oak for a period of 3 years, one of the contributing elements to the elegance of the wine.
The 2018 vintage was hailed as a classic, many winemakers declared it the best vintage since the famed 1970. It was a warmer year with minimal frost damage and excellent conditions at harvest.
Pale lemon in colour with aromas of lemon zest, green apple, vanilla pods, and white flowers with hints of pie crust and a faint brine note.
A well-balanced, fresh, and clean wine on the palate with crisp acidity leading into more citrus fruit core, leading to a typically steely, flinty finish. A magnificent example of the captivating wines from this region, it pairs brilliantly and elevates shellfish dishes or a traditional sole Meunier.