The Art of Hospitality 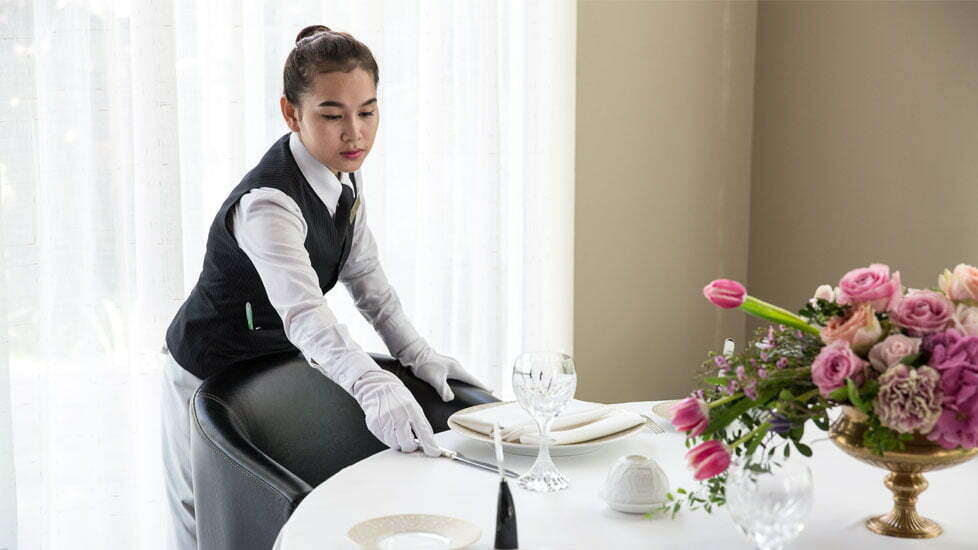 We may all be eating at home more than we ever have before but that doesn’t have to mean we can’t inject a little dining-out atmosphere into the moment, even if all we’re eating is a reheated edition of yesterday’s lunch. One of the easiest ways to do that is set a beautiful table before you sit down. And once we’re free once again to invite friends over for dinner, a beautifully set table is of course a wonderfully subtle way of showing them you care.

The French have long been known for their passions for food and etiquette, and there is no doubt that that nation has perfected a form of table setting that manages to look elegant and effortless all at once. Their modern approach to table setting came about in the 1800s with the gradual abandonment of the banquet style so favoured by Louis XIV, thanks to its ability to showcase tremendous abundance and wealth. Such displays might have been considered hazardous to health in post-revolutionary France, which helped to lay the ground for the new Service à la Russe which continues to dominate the way Western restaurants set their tables today.

The new style meant that instead of tucking into those of the huge array of dishes that you could manage to reach from your seat, courses were served sequentially with the food being portioned out to each guest by the waiters. The new style also allowed for dishes to be set out on the table for guests to serve themselves, but instead of plumping for those they could dip a long spoon into, dishes could be passed around (always to the left) and were meant to be shared. Place settings included a charger plate, the necessary cutlery and glassware, napkins, bread and salad plates, condiments and, of course, the decorative elements.

So how, with its puzzling mix of elegance and simplicity, sophistication and rustic charm, do you set up the perfect French table?

Charger plates (the big ones) are, of course, optional but if you’re setting one so you can eat a bacon sandwich at home alone, then it’s possible that things have gone a little too far. But when inviting guests to dine, a distinctively coloured charger plate can give your whole table a real lift, especially if you keep other decorative elements to a minimum. If you’re plating up in the kitchen to bring to the table, you can remove the charger plate at the first course or afterwards, as long as it’s gone by dessert.

Is set out in the order in which it will be used working from the outside in, forks on the left, knives and spoons on the right. Except for the dessert and cheese settings, which should be arranged horizontally in front of the top of the plate.

Modern cutlery as we know it today also came about in the 1800s when smarter tables dropped sharp and pointed “stabbing” knives for blunt-bladed, round-tipped ones. This perhaps marked a civilising of Europe’s dining tables — harder to maim your fellow diners with — but was so revolutionary it even changed Europeans’ faces. Paired with another newcomer, the fork, the modern utensils meant that Europeans no longer needed to grip and tear at their meat with their teeth, but could instead daintily chew on pre-cut morsels. And thus the entirely modern over-bite was born.

If you want to show how really au fait you are with French style, place the forks with the tines facing down. The spoons can also be arranged face down — à la française — or face up — à l’anglaise. The cutting edges of the knives always face the plate (a throwback to when they used to be dangerously sharp).

Fish knives are pretty but not strictly necessary — their unique design came about from a need to distinguish them in the cutlery drawer from ordinary knives which were usually made of steel which reacted with the acid in lemon juice that was (and still is) popularly served with fish. Stainless steel was not invented until the 1920s, so until then the distinctively shaped fish knives made of silver were necessary to avoid the foul metallic aftertaste that ordinary steel left behind.

Butter knives are also optional, but where used should go on the bread plate.

Steak knives on the other hand should never be missed out on when the call arises.

The glasses go at the top of the knives and are arranged on a slight diagonal in size order from right to left, from largest to smallest. Thus the water glass should be on the far left, followed by the red wine glass, and then the white wine glass.

It may seem fussy, but a nice tablecloth makes a world of difference in creating a special atmosphere, which also just happens to make everything taste better too. The good news is that once you have one nice piece of linen at home, there are no rules on whether you have to iron it or not. You can leave that one to the restaurants. One nice touch is to use a square tablecloth for a round table. It creates a more elegant “drop”.

Napkins should never be considered optional though, even if you’re eating a bacon sandwich at home alone. More good news: while you could spend the afternoon styling your napkins into various animals, flowers or bishops’ hats — surely that time could be better spent preparing a fine risotto? — the simplest approach is always the most elegant. Simply fold the napkin in half, so the long side becomes the short side, then from the top of the long edge fold down one third (to create a square) then fold in half. Place it to the left of the fork(s), or on the charger or first service plate (never under the fork), with the smooth seam facing your guest and the loose end invisible.

It’s nice to be able to easily reach what you need and dividing salt, pepper, butter and other condiments into small ramekins for large table settings is a good way of achieving that, and also for adding a discrete dash of extra colour to the table.

The French like to keep these to a minimum. A simple flower arrangement, which doesn’t block guests’ view of each other, more than does the trick. Alternatively, divide it up into smaller arrangements in small, pretty vases and use them to elegantly divide the space on the table.

After that, all that remains is some good food, good company and a good time.